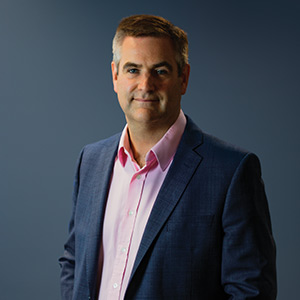 Richard Stegall, CEO The Fintech Core: A Leap Of Faith All Financial Institutions Must Take To Remain Relevant

Financial institutions (FIs), be it your local bank, credit union, or even your favorite grocery chain, which offer an ‘alternative banking solution,’ are facing unprecedented challenges. While this has been known for some time, these challenges have reached critical mass during the COVID-19 Pandemic. The time and need for a fundamentally different approach to technology and infrastructure is now.

"To remain relevant and excel, FIs must ‘digitize’ nearly all interactions they have with their customers."

After the Global Financial Crisis in 2008, new fintech companies emerged by taking an existing, legacy product and building technology that made the product easier to buy and use. In fact, there have been so many successful fintech’s emerge over the last decade that a new industry has been thrust upon us. As it relates specifically to the banking and payments landscape, the new fintech industry is powering the rise of ‘challenger and neo banks’ (neo banks) and nontraditional FIs (mobile phone providers, municipalities, colleges and universities, and grocery stores) – mostly unregulated organizations who are directly competing against the legacy banks, credit unions and payment companies we’ve grown to know and trust for most of our lives.

According to Richard Steggall, CEO of one of the banking and payment industry’s leading financial technology providers, Urban FT, “It doesn’t stop there though. Not only are legacy FIs under threat from the neo banks, but they are now also under threat from the more modern, ‘digital first’ banks, who came into the market, not just with their banking charter, but with embedded fintech capabilities that preempted the shift from mostly ‘physical’ to mostly ‘digital’ interactions with their customers.” 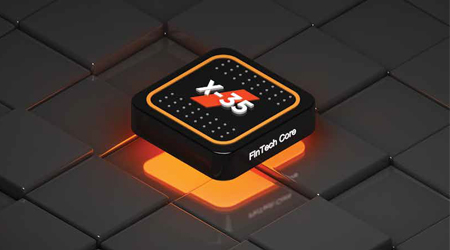 Steggall went on to say, “We all acknowledge that the legacy FIs will, and must, continue to serve a critical role in supporting our communities and the small businesses that operate within those communities. While it is true that nothing stops these FIs from deploying equally innovative and competitive solutions –aside from large amounts of capital, endless third-party integrations, expansive tech teams, and an R&D team to dream it all up – the process for accomplishing such an outcome is extremely time-sensitive, often leading to defeat before the process even begins. The big incumbent FIs (the ‘too big to fail’ mainstream banks), much like the neo and digital-first banks, also have embedded fintech infrastructure, allowing them to remain innovative, competitive, and relevant as a competitive advantage. Legacy FIs, though, have the trust and respect of their communities, and that’s an incredibly strong foundation to build from.”

However, for any FI – legacy or not – the ability to innovate comes down to the availability of supporting technology infrastructure.

Consider this an approach of delivering fintech infrastructure natively, almost like an Amazon Web Services for FIs.

For most FIs, this infrastructure has traditionally been provided by their Banking Core – a general ledger, with reporting, tellersystems, document imaging, and a few other archaic capabilities – to run their branches and power their product offerings.

Under the hood: A maze emerges

With the advent of the fintech industry, many FIs, either directly or through their Banking Core, have sought out, contracted with, and consumed various third-party services to add to and complement their traditional product offerings. Thus, allowing them to keep pace with the demands of endusers. 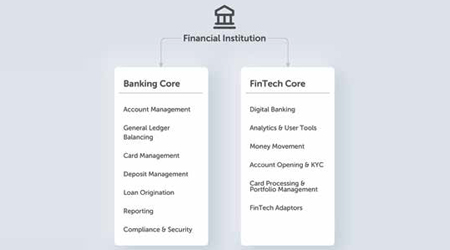 FIs have, through a ‘band-aid approach,’ deployed certain digital banking solutions and hoped that was good enough. But to remain relevant and excel, they will need to roll out new, more modern products, but also must ‘digitize’ nearly all interactions they have with their customers. This encompasses everything from account opening, new products and services, signature cards, customer advice and recommendations, account changes, card issuance, etc. 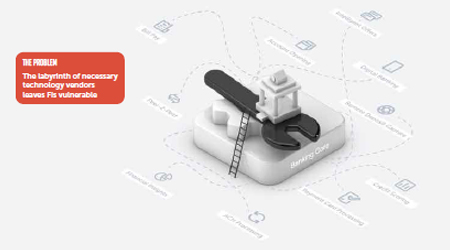 “The Banking Core is clearly necessary for the long-term survival of any FI. But the Banking Core can no longer be the blocker to innovation and forward momentum for FIs. FIs need to access more of what the Fintech Industry has to offer today, and, more importantly, what it will offer in the decades ahead. However, FIs cannot endure the endless maze – a labyrinth if you like – of third-party technology platforms, all using different forms of connectivity and technology languages, and all requiring ongoing vendor due diligence as well as contract reviews and audits. Moreover, it is utterly untenable that an FI can, or should, build a ‘middle layer’ to ingest all of these services, and from that, design, build and deploy products and services that are remotely innovative. In an ideal world, the Banking Core would have this covered for an FI, but most don’t, and in fairness to the Banking Core, we need them to be good at maintaining the ledger, and perhaps leave the rest to someone else” according to Steggall.

FIs, no matter the size or type, deserve an equal opportunity when it comes to delivering innovative user-driven experiences that speak directly to customers’ needs. And, as relevant as the Core remains, it no longer needs to hold its clients back. FIs need access to new, future-proof infrastructure – a ‘Fintech Core’ if you like. Think of it as the advent of Infrastructure as a Service (IaaS) for FIs, a service that ‘levels playing field’ and helps FIs get back to competing on relevance and customer service rather than technical capabilities and geographic (or virtual) presence.
FinTech Core: Where Innovation and Simplicity Meet

The FinTech Core is the technology that sits alongside an FI’s Core to consolidate services and rapidly deploy products seamlessly. It creates end-to-end efficiency. The FinTech Core and a Banking Core work hand-in-hand, enabling real innovation between FIs and their customers in ways and speeds never seen before.

According to Steggall: “Consider this an approach of delivering fintech infrastructure natively, almost like an Amazon Web Services for FIs. FIs get to benefit from the continuous efforts of an R&D Team, allowing them to digitize nearly every interaction they have with their customers, while significantly compressing the number of implementations, systems, and platforms they need in order to leave their competitors behind. And this was the driving mantra behind our efforts to deploy America’s first Fintech Core.” 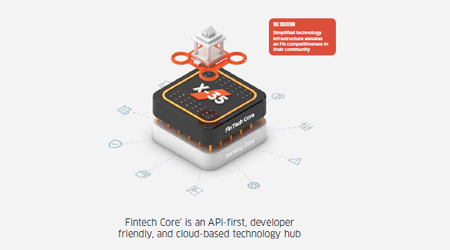 Steggall’s Urban FT has emerged as one of the leading and fastest-growing financial technology providers to the banking and payment industry. Since launching its first service in 2015, Urban FT now serves over 500 financial institutions, processes over $18 billion in transactions a year, powers over 5 million mobile sessions a month, and processes over 12 million images a year.

Urban FT’s X-35 Fintech Core is an API-first, developerfriendly, and cloud-based technology hub that operates alongside and connects with an FIs Banking Core or payment processor. It is agnostic by design and allows the amalgamation of any and all fintech solutions an FI wants to ingest, into one centralized platform. X-35 enables streamlined API integration, all while being accessible as part of one vendor relationship that’s governed by one contractual relationship.

It has been designed to enable any FI, of any size, to rapidly and frequently create and deploy state-of-the-art products seamlessly, without the prohibitive expense they were previously faced with. It’s cloud-based and serverless microservice architecture supports continuous product innovation, seamless technology updates while creating significant operational and economic efficiencies, all from a robust and scalable environment built to exceed industry and regulatory best practice.

“FIs no longer need to contract with and integrate with a labyrinth of third-party vendors or try to build a ‘middle layer’ to then build their products on top of. X-35 is the advent of Infrastructure as a Service (IaaS),” explained Steggall.

In addition to enabling the consolidation of third-party solutions – almost like a ‘fintech infrastructure API marketplace’ – X-35 also boasts a suite of native products and tools that give the FI an immediate and solid foundation to start developing their future product offerings from.

Steggall concluded by saying “as FIs - particularly those serving regional and community America - look to regain their share of the banking and payments market, they know that it will come down to leveraging their connection to their communities and supporting them with innovative product and service offerings. These FIs needn’t limit themselves to just catching p with their competition. They need to look at ways they can leapfrog the competition entirely. And with X-35, it’s finally possible! We founded Urban FT with the vision of giving our clients the means to ‘dream big’: ‘deliver exceptional,’ and that’s precisely what X-35 does for them.” 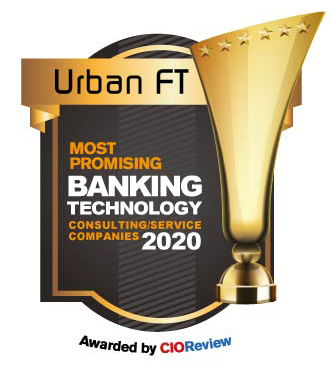 Description
Urban FT has emerged as one of the leading and fastest-growing financial technology providers to the banking and payment industry. Since launching its first service in 2015, Urban FT now serves over 500 financial institutions, processes over $18 billion in transactions a year, powers over 5 million mobile sessions a month, and processes over 12 million images a year. 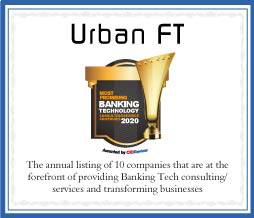 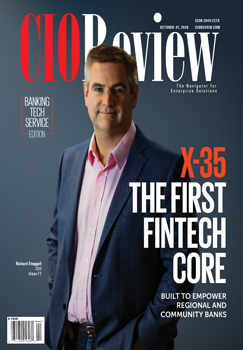